What is your role at IllFonic?

I’m a Lead Designer and I’ve been working here at IllFonic for almost 5 years now.

What have you worked on since joining IllFonic?

I helped build the single player challenges and cinematics for Friday the 13th: The Game, designed a lot of the systems in Predator: Hunting Grounds, and also worked on various things in Arcadegeddon. 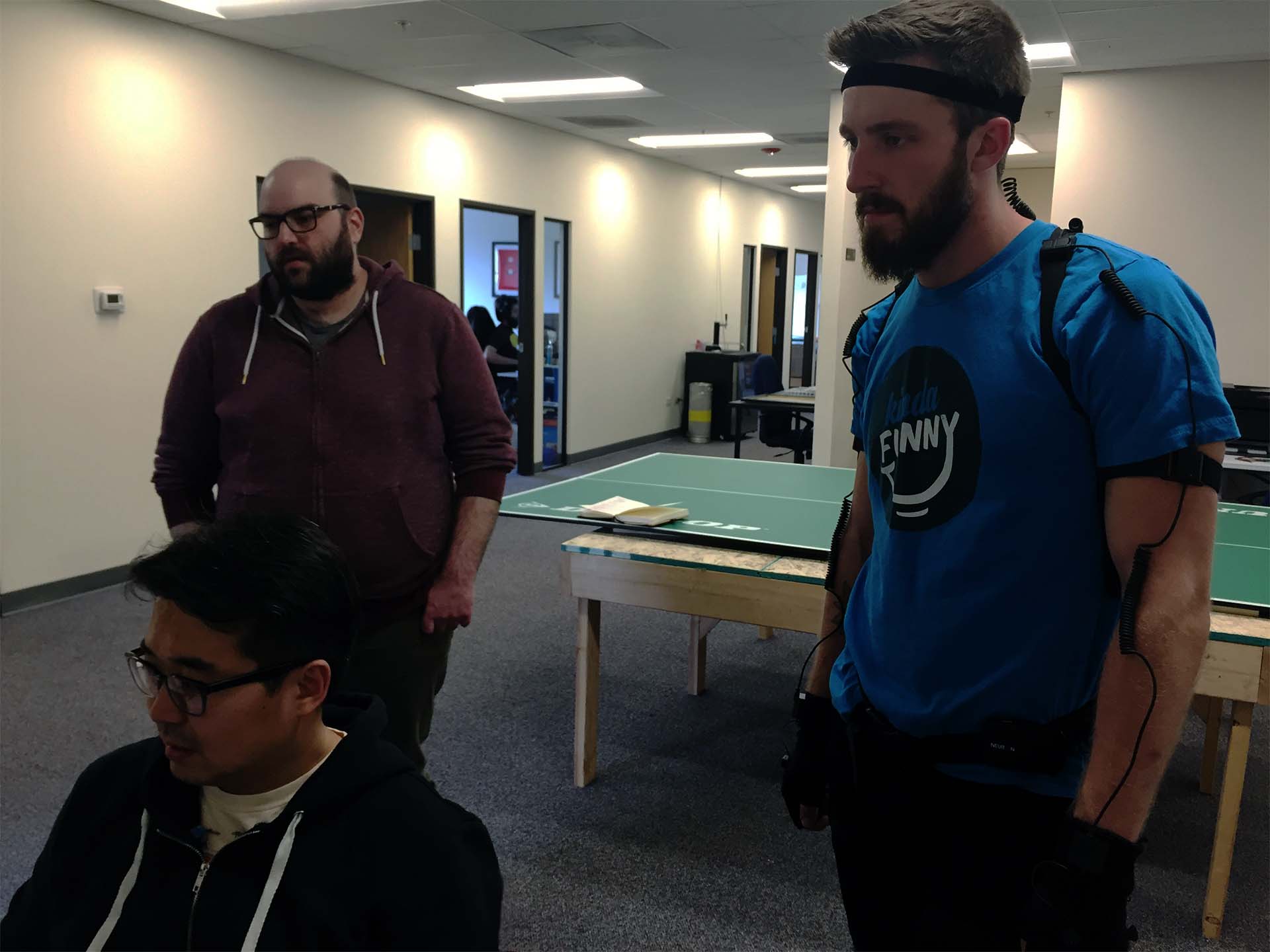 What kind of things do you need to consider when you’re working on the design of something?

While there is a pretty extensive list to consider, it really can be boiled down to making something fun and understandable.

I know that feels like a bit of a cheap answer, but every situation is so dynamic in development that sometimes you need to step back for the bigger picture when considering a design’s complexity. Games 20 years ago still hold up to this day because of that fact. They still managed to create captivating, fun experiences with so much less than we have today.

With this in mind, I consider the impact of the design at a high level, assess departmental workload, highlight readability elements, and get an iteration in to test as soon as possible. You can talk and theorize ideas all day, but it really has very little value until you can get it in front of actual players to make sure it is as fun and understandable as you think it will be.

Are there any examples you would like to share of a feature that you felt was challenging to design?

Creating the stalking experience for the Predator in Predator: Hunting Grounds was challenging but fun to put together. There were a lot of variables to consider when coming up with a way to make it balanced in an asymmetrical game while at the same time, considering how to make it as true to the movies as possible.

A good example of a specific part of this experience was the Predator’s cloaking mechanic. We had to put an equal amount of effort into both how the cloaking shader looked canonical, while also making it a functional, balanced element of the asymmetrical experience. We wanted the Predator players to feel like they can actually hide while also giving the Fireteam players a chance to find the Predator or at least know they are being stalked. Luckily, the movies rely heavily on the Predators clicking and mask eyes lighting up, so we were able to tap into those elements to help us bring it all to life with some balance.

What is your history with video games?

I was raised in a household that frowned upon video games. My family liked the outdoors, but I gravitated towards electronics instead. There was just something unique and interesting about video games that I just latched onto.

Even though I wasn’t allowed to own a video game system as a kid, I spent a lot of time going to friend’s houses and playing on their consoles. This continued until I was able to convince my parents to let me save up my own money to buy an original Xbox. I couldn’t afford video games at the time so I played a lot of Jet Set Radio and Sega GT 2002 since they were included. Owning my first console definitely solidified my love for video games.

How did you get into game development?

I felt that video games were a pretty solid option as a career for me since I was young. I decided that, as long as I buckled down, learned a lot, and worked hard, I would be able to work at a game studio.

Around the time that Mass Effect was released, the UDK (Unreal Development Kit) came out. It was basically a free engine of Unreal that was accessible to the public. There wasn’t a lot of documentation back then, but I scrounged up as much information as I could. I remember buying two large books that were all about mastering Unreal and I learned everything I could about the engine wherever I could find it.

From there, I started building levels and setting up meshes, materials, and vfx. Due to the lack of information back then, most of the processes were a lot of trial and error and seeing what exactly worked. I also had fun importing Mass Effect models and playing around with them. That was when I started to ramp up on Cinematic Design. At that time, my goal was to work at Bioware as a cinematic designer for the next Mass Effect due to how much the franchise influenced me.

That is what kickstarted the next big part of my life. Making machinima videos, which is basically video game cinema, or game cinematics. I went in that direction for a while and created machinima videos for YouTube and also played video games for a living for a YouTube group called The Creature Hub. Then, after playing video games for a living, I was finally able to circle back and start my dream job as a cinematic designer at IllFonic.

Other than Machinima, did your career in the YouTube space help you out at all for your current job as a Lead Designer?

It helped massively because I was constantly playing different games and around other people that were doing the same. Being immersed in a culture of people that were very opinionated on games gave me a sense of what is important to look at when developing a game. It really helped having genuine feedback from my peers, as well as our audience, about the things they liked and disliked about different games. With how much influence the gaming video/streaming space has on the industry, it's very helpful to have been on the other side of it in its earlier state.

What made you want to join IllFonic

I originally got into the YouTube space because of how quickly gaming was catching on, but my foundation and dream job still was in game development. During the later part of my YouTube career, I ended up helping IllFonic with some marketing videos and trailers, getting me back into Unreal and rekindling my love of development. This eventually led to me accepting a position. Their passion, creativity, and overall experience in the industry made it a very enticing place to work since I felt very connected just making games with a bunch of cool people.

What kind of games do you play during your free time?

I play a lot of different types of games, but tend to gravitate towards cooperative or multiplayer experiences (Deep Rock Galactic, and the FarCry, Battlefield, COD, Halo series). While those games fill that fast paced, punishing vibe, I also enjoy jumping into some longer story driven RPGs from time to time to just absorb the worlds (Witcher series, Mass Effect series, etc.).

This aspect has definitely evolved over time as my design skills and knowledge have evolved. I naturally pick everything apart and dive into how things are built now that I know what goes into them. Usually its a few features here and there, but sometimes mentally noting just about everything that makes the game what it is. I find myself especially focusing on features I really enjoy, or things I really dislike so I can discover the things that lead to those specific feelings impacting my experience. I definitely can’t play games the same anymore now that I help build them, but I really like that

I am looking forward to the future of the gaming industry. I think there is still a lot of untapped potential in video games and so many ways for the space to evolve with upcoming talent. I strongly encourage people to consider this field, as it allows you to truly create and innovate in a competitive, fun environment. So many disciplines are needed with how far engines have evolved that so many skills and perspectives can birth completely new thinking.

I’m also extremely excited about the future of IllFonic because there are a lot of cool things on the horizon. We're learning, listening, and building upon all of the experience we've gained from our prior games, and I think it will show as we continue to grow and make new games.